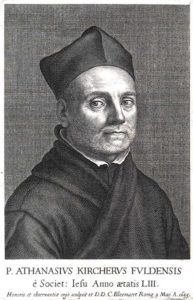 Athanasius Kircher (sometimes erroneously spelled Kirchner) was a 17th century German Jesuit scholar who published around 40 works, most notably in the fields of oriental studies, geology, and medicine.

Kircher was the most famous “decipherer” of hieroglyphs of his day, although most of his assumptions and “translations” in this field have since been disproved as nonsensical. However, he did make an early study of Egyptian hieroglyphs, correctly establishing the link between the ancient Egyptian language and the Coptic language, for which he has been considered the founder of Egyptology.

Kircher also displayed a keen interest in technology and mechanical inventions, and inventions attributed to him include a magnetic clock, various automatons and the first megaphone. The invention of the magic lantern is often misattributed to Kircher, although he did conduct a study of the principles involved in his Ars Magna Lucis et Umbrae.